If you've ever tagged people to photos in a platform (e.g., Adobe Lightroom Classic) and wished they would automatically be tagged for you when uploaded to one of the family-history apps you use, you're not alone!

Transporting photos and metadata from one platform to another can be very complex, especially when it comes to people tags. In fact, there are groups such as the Family History Metadata Working Group (FHMWG) that were formed to figure out how to make metadata more portable for our industry. You can see their RootsTech 2021 presentation here.

So, even though MemoryWeb is one of the first companies in the family history industry to import and read photo metadata, figuring out how to apply people metadata seamlessly inside our users' accounts hasn't been a slam dunk.

At first, we added people metadata as keywords inside your MemoryWeb account instead of as people tags because:

But we never stopped thinking about ways we could improve how MemoryWeb handles people metadata. And we've made some adjustments recently to our import process that we think will be real people pleasers!

* Unfamiliar with IPTC metadata? You can learn more here.

Now when you import photos with people metadata, MemoryWeb automatically tags them to your photos and creates a person profile. To help identify these special tags, MemoryWeb adds these people with the designation (imported) after their name so you'll be able to easily distinguish them from contacts you created inside MemoryWeb. 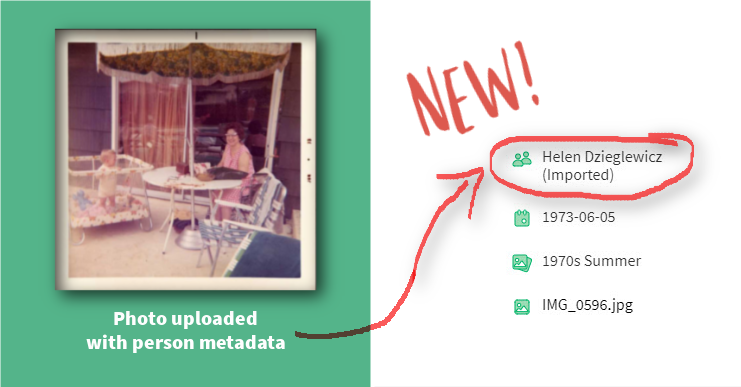 Why is person (imported) helpful?

We distinguish people who were tagged via metadata during the upload process with (imported) after their name so you can easily spot them. Why? MemoryWeb temporarily places all name details for (imported) people in the first name field. We do this to give you easy access to all the information you previously tagged to your photo and to give you FULL control over how you want these people added to your account.

Where can you see/edit (imported) people?

You'll be able to identify (imported) people in two places: 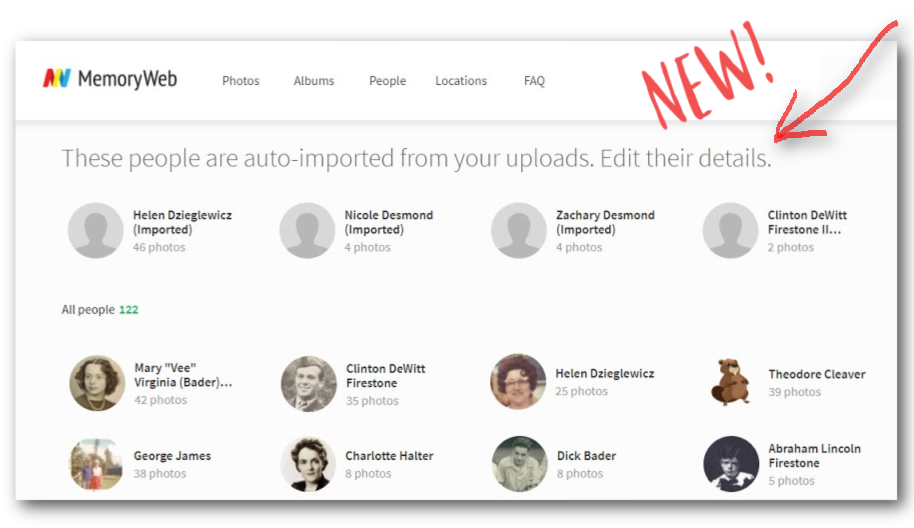 Let us know what you think!

The above functionality is available for the web and Android versions of MemoryWeb. The iOS version will have these added shortly. We love hearing your thoughts on new features, enhancements, and anything to do with MemoryWeb, so please share them with us at contact@memoryweb.me!