This is one of the questions we often hear: is there a way I can automatically add new photos to an existing album? Great question, and the answer is YES!

It's a pretty simple process once you know the steps. So, here's a quick primer.

First, you'll need to use MemoryWeb's desktop tool to upload the initial photos. You can download the desktop tool here, and here's a series of how-to videos that show you how to use it.

Once you have the desktop tool installed, find the folder of photos you wish to add as an album.

IMPORTANT: Before you add this folder to the upload queue, be sure you have named it as you wish to see it inside your MemoryWeb account. Keep in mind that the uploader will use the last two folder names you have the images stored under to label the album. For example, photos uploaded from Pictures/Jones Family/Holidays and Special Occasions will come in as an album named Jones Family > Holidays and Special Occasions. So be sure that the two folders are labeled to your preference since you will need to keep the same names in your folder and in your MemoryWeb account to create the automatic upload of new images to your album.

Once you have your folders labeled, then add them to the desktop tool (be sure to watch the how-to videos linked above if you have any questions on how to do that).

Once you've uploaded your photos, you'll see them in your MemoryWeb account as an album. In this example, the photos were stored under MW/CJD Photos, which is how the album name was created. 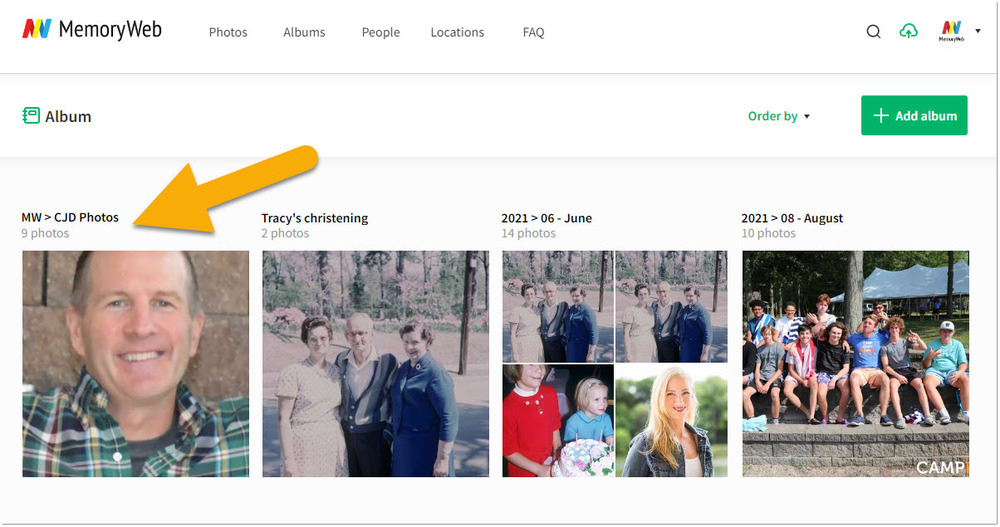 Getting More Photos Into the Same MemoryWeb Album

Next, if you add more photos to this same folder on your computer, you can add these images to the SAME album on MemoryWeb in one of two ways:

Option One: Restart the upload on the desktop tool

Option Two: Set your desktop tool preferences to have images automatically upload to the same album

If you want to have this process automated further, toggle ON the option to Launch app when computer starts.

Whatever option(s) you choose, the result will be that new photos added to your folders will be added to the SAME album you initially created by uploading through the desktop tool.